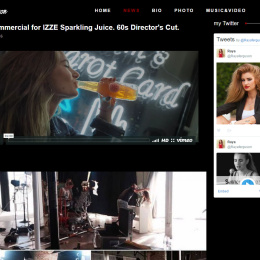 She was born in Germany on June 13, 1994. Her family traveled around the world during her childhood, spending time in Germany, Holland, Russia, Canada, Greece, and the USA. Her mother is a beautiful Russian woman and her father is Canadian. Raya has expressed that she was comfortable with her mixed parentage, making it easier to relate to different cultures. She began playing the piano when she was three and discovered classical music; from composers such as Rachmaninov, Mozart, Chopin and others.

Another main part of her life is dancing. From the age of five her mother takes her to different classes such as ballet, modern jazz,salsa,tango,hip hop. Eventually she decides to give hip hop classes to younger generations. At the age of 7, Raya enrolles in Classical music school, majoring in choir and piano. At that time she started playing not only piano but acoustic guitar, bass and drums. Later on she starts writing songs for her pop/rock band, where she is the leader of the group.

My mom and teachers always wanted me to be a pianist, but I knew that I needed to move on. I’m so thankful for my parents…They took me to all the possible classes and let me choose who I want to be. Everything that a kid could dream about."

Later on, she enrolles in GITIS (the largest theatrical university in Europe) at the age of 15. “It helped me to be a strong person. I realized that if you have a positive attitude, you can overcome any problems. You can’t give up, so keep pushing...even if other people tell you the opposite.”

After graduating, she moves to Los Angeles to pursue her dream. She plays some supporting parts in music videos of famous artists such as Ne-Yo and others.Also she participates in a short movie called “First Step” and multiple music videos as a dancer. What about her music career? She is currently recording her EP and releasing her music video which is called ”Make me stronger”.